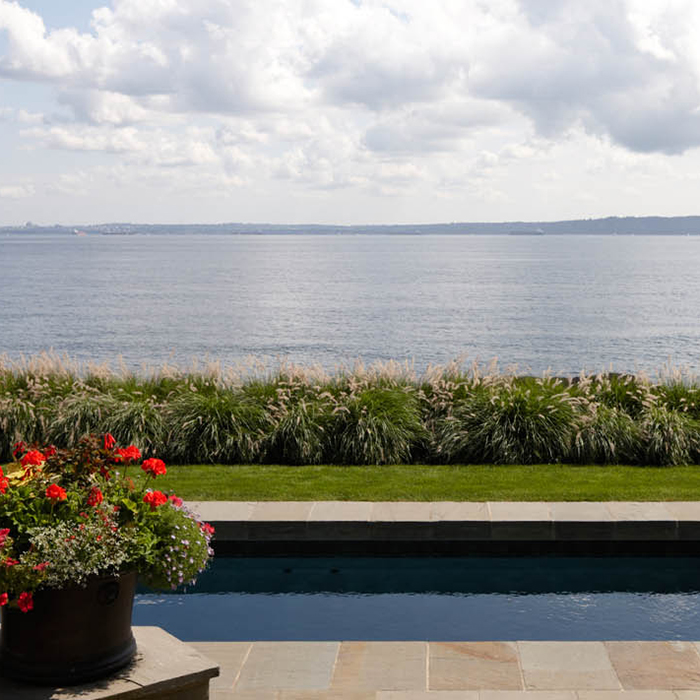 A bold address sign welcomes visitors to the residence. Laser cut from a solid piece of billet aluminum and imbedded in a granite corner post.

Beautifully designed by Vancouver-based landscaper Ron Rule, the gorgeous backyard pool area is a highlight of the house. Blasting regulations required the swimming pool to be hand-chipped out of the rock in the back yard. To preserve the natural beauty of the waterfront location, an underground bunker was constructed to house all of the pool's mechanical equipment.

Alex Chapman's designs called for two of the owner's treasured possessions - his Bluenose replica and the salvaged steering wheel from his father's sunken schooner - to be set on pedestal-style stands. The challenge of making this inherently top-heavy design viable was achieved by crafting the stands out of bluestone and unobtrusively pinning them into the floor and wall. The boat was then pinned into its stand and a metal bracket was fabricated for the adjacent stand to hold the unaltered steering wheel securely in place. Additional detail work included removing the wheel's hub and engraving it with the ship's name and the date of sinking.

The ideas of gifted designers are not always conducive to standard procedure. Alex Chapman's vision for the ensuite bath included a BainUltra drop-in tub installed as a freestanding element with tiled sides. To prevent the tiling from amplifying the standard irregularities around the tub's top edge, Fremar had a slab of stainless steel laser-cut into a ring that precisely follows the edge profile of the tub, but protrudes slightly, forming a perfect lip around the tub's perimeter and drawing attention away from any minor deviations.

Designed by Alex Chapman to complement the colours and decor of the house, the stairwell chandelier was custom made in New York.